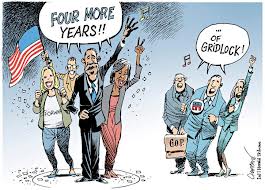 The financial market looked into the crystal ball when trading began the morning of Election Day, November 6, 2012, and predicted an Obama victory. The market’s prediction came about 12 hours before the TV networks made their predictions that evening. So how did the market decide that Obama was going to win? Well, it just looked at the money. And I’m not talking about flipping a coin.

After several soft weeks of declining, weak gold prices, in one hour during the morning of Election Day the rustless yellow metal spiked upwards $31.50 an ounce. This signaled that the market believed the Obama government’s inflationary, deficit-spending, quantitatively easing fiscal policies would continue as our status quo. While Obama’s slogan focused on change, and on protecting change, from the market’s perspective very little, if anything, was going to change.

Despite the Obama administration having one of the poorest economic and unemployment records among all U.S. administrations over the last 100 years, a narrow majority of the American people decided to give Barak Obama another four years so that he could improve upon his prior failure. And, to insure this outcome, Americans also re-elected most of the incumbent Republicans as the majority in the House of Representatives. And, of course, they will assuredly “help” Obama achieve what Obama thinks is best for the nation?

Duh! Seems like Hollywood writer and director Peter Farrelly was being prophetic when he created the 1994 movie Dumb and Dumber. I’ll let you figure out which of the two American political parties is dumb and which is dumber. Why is this happening? Because the heart is sick, the head is foolish. 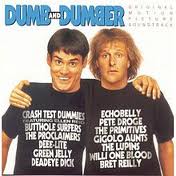 And, what did the obscene $6 billion spent by big American money on this last election really buy or accomplish, besides turning the U.S. of A. into a “bastardized democracy,” according to the Canadian MP Pat Martin?

Well, a political cartoon that appeared in today’s Times-Colonist newspaper (Victoria, B.C.) sums it up nicely.  In 2008, America was divided almost equally between smug Democrats and angry Republicans. The 2012 American political map is now divided between very smug Democrats and very angry Republicans. Wow! So U.S.$ 6 billion can only buy in 2012 a couple of adverbs on negativity?

There have been times over the course of the American republic during the last two hundred years when strong leadership would have been nice, but it wasn’t really essential for the nation’s growth, much less its survival.  Almost as if it was on automatic pilot, the American nation grew noticeably more prosperous and qualitatively stronger year after year. America’s ascendency to greatness seemed unstoppable, a genuine manifest destiny.

But that’s not the situation any more. Now America is in decline. See Sarah Boesveld’s article in the National Post: Canada rises to Top Five in Economic Freedom ranking as U.S. plummets to 18th  http://news.nationalpost.com/2012/09/18/canada-rises-to-top-five-in-world-economic-freedom-ranking-as-u-s-plummets-to-18th/ Accessed Nov. 8, 2012

America is living on borrowed money and borrowed time. And far too many very smug Americans are living in denial about the seriousness of their situation. America, now, is more like Wiley Coyote 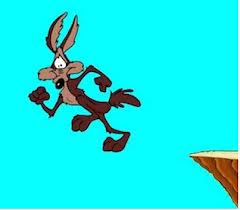 who has just run off the cliff but his legs are still churning furiously in the air—while outside observers wait breathlessly for the inevitable to happen: the sudden plunge that always ends with a violent crash on the rocks at the bottom of the canyon.

Media commentators are talking about what is called the “financial cliff.” But Rep. Ron Paul, who unsuccessfully ran for the presidential nomination of the Republican Party during this last election cycle thinks we’re already over the cliff. We’re broke, he says. And beyond that, the nation can’t fill its leadership positions with enough people who will do the wise things necessary to avoid complete disaster. According to Rep. Paul:

People do not want anything cut. They want all the bailouts to come. They want the Fed to keep printing the money. And they don’t believe that we’ve gone off the cliff or are close to going off the cliff. They think we can patch it over, that we can somehow come up with some magic solution. But you can’t have a budgetary solution if you don’t change what the role of government should be. As long as you think we have to police the world and run this welfare state, all we are going to argue about is who will get the loot.

During his victory speech on Election Night, Barak Obama insisted that the best days for America are yet in the future. Well, maybe. But not if the nation’s political leadership remains gridlocked and frustrated from formulating real solutions to America’s massive problems: its uncontrollable appetite for racking up more than U.S.$ one trillion of debt every ten months, its trade imbalance with the rest of the world, and its lack of energy independence. And that’s just for starters.

Most media commentators today aren’t talking about the massive and rapid growth in the nation’s deficit in morals and ethics. Even the phrase “social conservatism” seems to be anathema to the very smug among the governing class these days.

There was a period of time in America’s past, about 150 years ago, when Democrats and Republicans and the nation as a whole were similarly embittered and divided. We call that period of time the 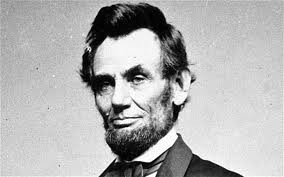 American Civil War. The occupant of the White House at that time was trying to hold a divided America together. Abraham Lincoln, however, unlike most of the 21st Century’s hypocritical American politicians, got his inspiration about the right things to do in his personal as well as public life from the Judeo-Christian Bible. He understood the truth and wisdom of the following the principles taught by the Scriptures. One of those principles that Lincoln was fond of is particularly pertinent at this exact moment to the America of the 21st Century:

Then some people brought to Jesus a man who was blind and could not talk because he had a demon. Jesus healed the man, so that he was able to talk and see. The crowds were all amazed at what Jesus had done. “Could he be the Son of David?” [the Messiah who will rule in the prophesied Kingdom of God] they asked.

It is neither money, military strength nor “political correctness” that makes a nation great. To back away from the edge of the cliff, America’s leaders and people need to change their vicious partisan spirit that has infected the whole nation with bitterness, rancor and backbiting.  The whole political dialogue needs to change. As Jesus of Nazareth said to the political slanderers and mudslingers of his day,

You brood of vipers! How can you speak good, when you are evil? For out of the abundance of the heart the mouth speaks. (Matthew 12:34 English Standard Version)

The American people and its leaders need to re-embrace the motto that their ancestors once believed in so strongly that they even had it inscribed on their money: In God We Trust.  Unless the nation returns to its roots, America like Wiley Coyote, will eventually plummet and crash on the rocks below, being bankrupt not only financially but also morally. And the world will marvel at how the leaders 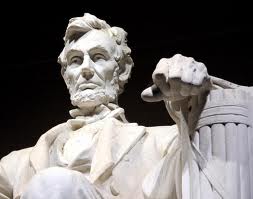 of what was once the greatest nation on Earth destroyed it bit by bit foolishly, all by themselves, as Abraham Lincoln warned so long ago.